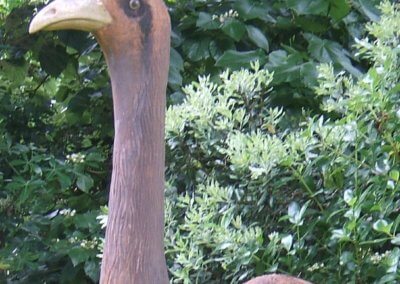 Mythology: “The last of the Giant Moa lived here in Rocky Bay Cove some four hundred years ago. Hunted to near extinction, only a single pair remained. Legend has it that when the last male was slain with a fatal blow to the head from a hunters club, the female grieved and turned to stone. She has to this day remained frozen in time, awaiting the return of her lost  companion.”

Dinornis giganteus (commonly known as the Giant Moa) was the largest of the eleven species of moa and the tallest bird that ever lived (growing to some 3 metres in height). Prior to human habitation, the moa dominated our largely forested kingdom from coastal bush to inland ranges and across grassy plains and alpine tussock.  A full-scale representation of the Giant Moa created for this site by Mathew de Boer.