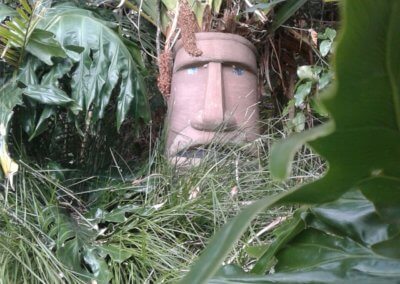 Mythology: “The Moriori were of Melanesian, not Polynesian, origin… No one knows whence they came, nor why they came… They were ocean waifs occupying three canoes that had been carried away by storm from some island to the westward…As time rolled on they increased in numbers until they occupied many parts of the island…They were slight in build and had dark skins, upstanding or bushy hair, flat nose, and upturned nostrils. They had a habit of looking sideways out of the corners of their eyes, and were indolent and chilly folk [who] afterwards settled the Chatham Islands… In their new home, they became peace-loving, timorous and lazy [and] as hopelessly isolated as Robinson Crusoe on his island.” [The Myth of the Moriori, School Journal, 1916.]

SATIRE: Legend has it that New Zealand’s Moriori originated from the island of Madagascar [ an “island to the westward”] some 800 years ago. A fierce storm carried three canoes to our shores where one of their number was separated in a tropical storm to the east of what we today know as the Poor Knight Islands. Deprived of steering and navigation the stricken vessel with five aboard drifted and eventually wrecked at the entrance to Rocky Bay Cove. Washed up and near death, the survivors found sanctuary on the foreshore of the cove. With only the seeds of the Majestic Palm, the Moriori from the lowlands of Madagascar settled in the upper reaches of the cove valley, where they planted their seeds and made their home where they still live today. The two remaining canoes with their fellow travellers were blown down the East Coast of New Zealand to the Chatham Island. After establishing a peaceful civilization which by 1835 numbered 1600, they were themselves invaded by mainland Maori. Ten percent of their population was killed and the remainder captured as slaves.

The five Moriori men were created by Wade Gilbert.

The above story is of course satire. The history of the Maoriori is a fascinating one of arrival and survival. It is pleasing that the injustices against the Moriori have now been officially acknowledged in a formal deed of settlement signed with the NZ Government in 2021.

The moriori.co.nz wesbite recommend a number of resources to learn more: