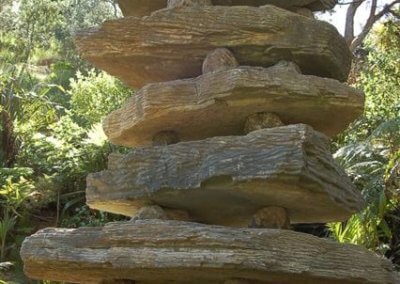 Completed in February 2010, the Seven Tiers stand 4 metres tall and weighs over 10 tones. The sandstone slabs are said to be 30 million years old and are supported on volcanic boulders.

Mythology: “The Cascade of Seven Tiers has its origins in the Hatepe eruption of 180 AD. That and earlier eruptions formed what we today know as New Zealand’s largest lake, Lake Taupo. Such was the force of Hatepe that countless tons of pumice, ash and rock fragments were ejected some 30 kilometers into the air and visible in the sky as far away as Rome and China. It was display of strength never before known in our uninhabited land.

Some of those rock fragments fell as far north as Rocky Bay Cove; cascading volcanic rock and sandstone from the heavens to form the Cascade of the Seven Tiers. The formation remained a secret of the earth until 2010 when heavy rains caused a landslip to reveal what you see today.”